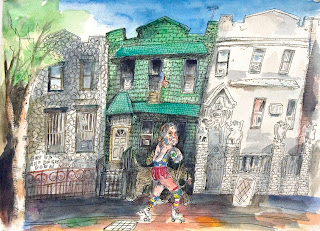 Australian artist Andrew Chan has a B.A. in Architecture from RMIT in Melbourne and an M.A. in art from NYU. Based in New York since 1999, he has received grants from the Pollock Krasner Foundation and the New York Foundation for the Arts, and his work been featured in TIME, the Wall Street Journal, the New York Times and on CNN. In 2011 his work can be seen at the Bronx Museum as part of Aim 30 and at Randall’s Island where he has installed a 15foot high sculpture on the grounds. His essay on TV cooking shows as pornography is included in The Gastronomica Reader (University of California Press, Feb. 2010) and was presented at the College Arts Association conference in Chicago and at the Gourmet Voice conference in Cannes.
STATEMENT
In my drawings, the basis of all my works, I use line to assimilate and create representations—in some cases, bordering on caricatures—of people and objects where the form of the subject is distorted merging the organic and the inorganic creating anthropomorphic beings set in distorted cityscapes. In creating my works I gather information from the media, along with documenting my subject with a sketchbook and/or camera, the results of which are fused together with my own remembered and actual experiences.
www.AndrewChanArt.com
Posted by About BRYR at 6:37 AM